Life was difficult then. We’d had a house fire, moved back onto our property and lived for eight cramped months in a vintage RV, then upgraded to a 600 square-foot, 1930s-era cracker cottage with no heat or a/c.

We were living in the cottage when we lost our beloved dog Cassidy at the age of fourteen-and-a-half. His mate Querida mourned Cassidy’s absence so deeply she would not eat or drink or go on walks. She was 13 years old and we figured we would lose her soon, which meant neither of our dogs would live to join us in the house we were in the process of building.

We were exhausted, physically and emotionally, from the physical labor, mental effort, exposure to the elements, and two years of lost sleep and free time.  (“Even my soul feels old,” said my husband, who works hard and hardly ever complains.) According to the-evilest-bank-in-town who held the construction loan we made early payments on each and every month, we should have been finished building eight months previous. They were threatening to sue us to force us to borrow an additional $50,000 to bring in paid workers instead of continuing ourselves.

And so three days before Halloween, on one of those clear, cold nights that makes North Florida almost in tune with our Yankee cousins, I was on my hands and knees in my someday kitchen, plopping rat-gray mortar onto the floor and then spreading and notching it. The soundtrack to life thumped over and over in the background: my husband and the pneumatic stapler maniacally putting down our tongue-and-groove hardwood flooring.

I made my way outside to wash the drying mortar from my trowel, dreading using the hose in the chilly night, dreading another three hours of working on my knee-pads before heading into the cold of the cottage to sleep for six hours, get up, and do it all again.

And that’s when I saw the dog.

I went out three more times that night and the little brown pitbull was still there, practically wagging herself in half, more excited than shy, but clearly determined that she was home. At midnight I insisted my husband step outside and meet the dog. “She looks so hungry,” he told me, and measured some of Querida’s senior dog food into a spare bowl. The little pitbull spent the night in the cottage with us, and the next day we worked our butts off to return her to whomever had lost her.

That was not meant to be. She was ours, or we were hers, even though we struggled against it, posting her on Facebook and on Lost and Found Dog websites, shopping her out to all our friends who might be interested. We tried so hard to get rid of that dog. We were too exhausted for a puppy, and her reputation preceded her.

One day I was walking with her off-leash on the trail along the northern edge of my five acres. She was such a good dog she walked right beside me, making occasional forays after noises that might be rabbits or squirrels, but always returning when I asked her to. And still I frowned at her and said something I may always be ashamed of.

“I know about your kind,” I told her, “and if you show any bit of aggression toward Querida, if you so much as raise a single hair at her, I will take you to the animal shelter the very next day.”

And Yagé’s sweet pitty forehead wrinkled up, her golden-orange eyes blinking with worry, because of course she recognized the tone of my voice, knew that I sounded unhappy with her.

We circled the property and returned to the house-under-construction to find Querida waiting for us. Impatiently. She gave a low growl and Yagé snapped to attention. She looked down and away from Querida and ran over to greet her. In the 14 months they lived together, until the very end of Querida’s life, Ya never growled at her, never showed aggression. She never even dared to seem sullen or grumpy under the yoke of Querida’s tough tutelage.

Because Querida had found a new reason to live – training this young apprentice to replace her. Querida was part sheltie, and she herded Yagé unmercifully. She growled, barked, yipped, and nipped the backs of Yagé’s legs. One night Yagé was sleeping comfortably until Querida woke her up and forced her out the doggie door into the frosty night. The moon was completely dark and the stars glittered through the pine trees as my eight-month old pitbull ran around the small yard that surrounded the cottage. She stopped at each corner of the rickety field fence and barked, uncertainly at first, then with confidence.

Querida huffed out a sigh, strutted arthritically back into the shelter, and laid down on Ya’s fluffy pillow. She was officially retired, and this dog –  who had examined each of my friends, family and house guests so suspiciously, who had herded them to the couch, who had woofed in protest when they stood up to fetch a glass of water or go to the bathroom – never barked again.

Oh, the joys of Lola.

Silly where Yagé is serious. Twice the athlete and half the height (ok, that’s a bit of an exaggeration). Able to dig a hole as big as she is in 30 seconds and eager to swim in any kind of water.

A year after Querida died (she made it to fifteen years and a week) I finally talked my husband into adopting a companion for Yagé. We knew we had to get another pitbull. Because…

We moved fast – two days after he agreed to my second-dog fantasy, Nathaniel fell in love with the dog with the stormy eyes and the biggest ears on Facebook. She was a pitbull, about 10 months old, pulled from a rural animal shelter by Last Hope Rescue to live in a foster home until she was adopted.

We were ignorant enough to expect her to be just like Yagé.

And even within the same breed dogs are individual souls with different experiences, attitudes, likes, dislikes, and predilections.

This lesson was easy to learn – I thank Dog all the time that Lola is who she is, a leaping, butterfly-chasing, pin-your-knees-to-the-bed-the-better-to-snuggle-you, mischievous, joyful dog. 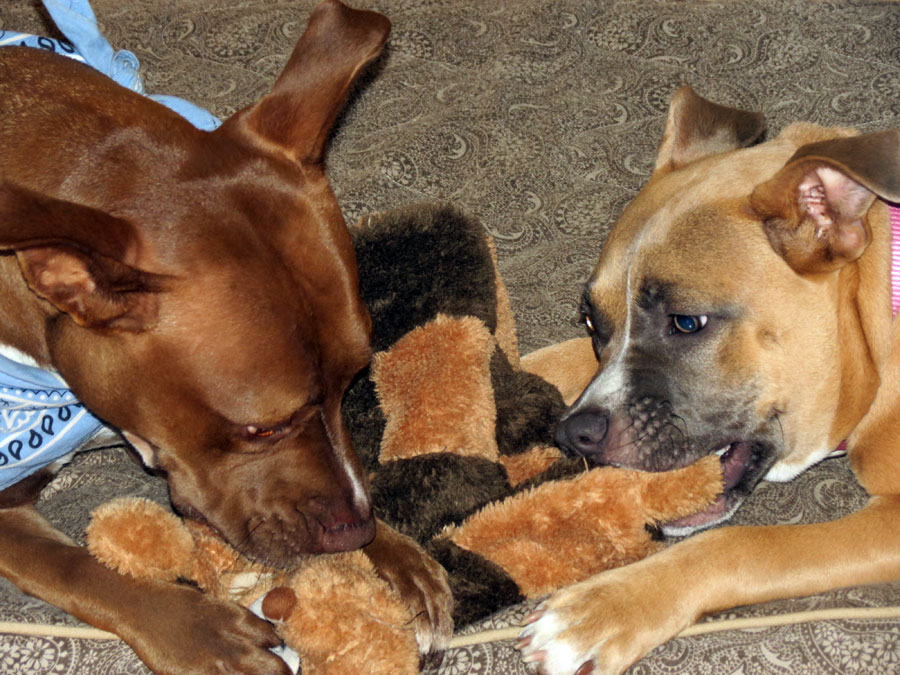 Here are some of the lessons I have learned living with Lola and Yagé.

If You Love Them, You Advocate

Recently I entered a contest to get a chance to be a breed ambassador and calendar model (think of me as human decoration for my pitbull princesses). One of the questions they asked me was at what point I decided to become an advocate for blocky-headed dogs. I described a moment in a suburban neighborhood when I was walking both the grrls and a speed-walker saw us, jumped in fright, and crossed the street to avoid us.

For one tiny moment my pitbulls turned me into a black man and I felt prejudice, viscerally, probably for the first time in this lifetime.  I was too surprised to be offended, and too interested in her reaction to be angry.

When I run up against people’s ignorance about blocky-headed dogs, I call up that moment when I told Ya I knew all about her kind. I was so wrong. I was an asshole. A breed-ist.

I reference my own past ignorance and prejudice so that when people say stupid things about pitbulls I can try to gently educate them instead of making them defensive and unreachable.

This worked the time a visitor to my house asked me if he needed to act differently around my dogs since they were pitbulls. It would have been easy to get angry. I made a joke instead, telling him to be sure to close the guest room door all the way when he went to bed because the grrls were likely to leap into bed and snuggle him until his body parts fell asleep. At the end of the weekend we had a frank conversation about pitbulls and their portrayal in the media and he walked away with a new understanding.

Another time I hosted a baby blessing for over half a dozen infants and toddlers and their families. One protective mother asked me to keep my dogs away from her baby because pitbulls made her nervous. I taught her how to command the grrls to sit, stay, go to bed, and one of the most important commands you need when faced with my pitbulls – “No lick.” After two hours of good behavior she was converted – holding her baby out for the grrls to give kisses and begging people to take pictures.

Of course the thick cloak of privilege I wear protects me here, too. Most of the people I meet seem to have positive attitudes about blocky-headed dogs. That it makes it easier to focus on the good, the positive.

But maybe there are people who hold their tongues when I talk about my rescued pitbulls and how they are such princesses.

Maybe in the line at the grocery store I look like an unimpugnable professional white woman and no one dares to protest.

Maybe if I was a person of color, or an immigrant, or a teenager wearing a certain kind of clothing, my story would be a different one.

Maybe if I didn’t have a great job (and a husband with a better-paying one) paying for training classes wouldn’t be such an easy decision and my high-energy dogs would be less manageable and well-mannered.

There are so many maybes to consider that the only thing I am certain of is this – without these dogs in my life, I would not be as thoughtful, as observant, as considerate, or as loved. 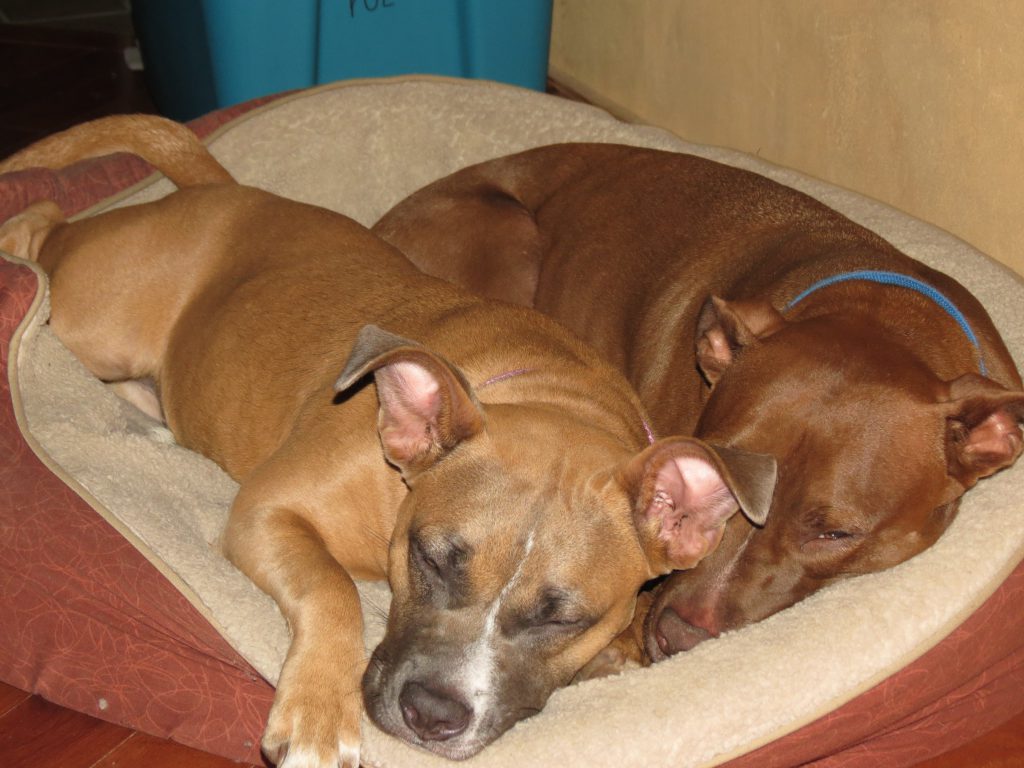 If you are interested in learning more about pitbulls or dog rescue, advocacy, or owner support organizations, and you don’t mind pictures and videos of adorable dogs, here are my favorites.

Check them out, and if you can, donate or buy a t-shirt.

One Reply to “Pitbulls on Parade”